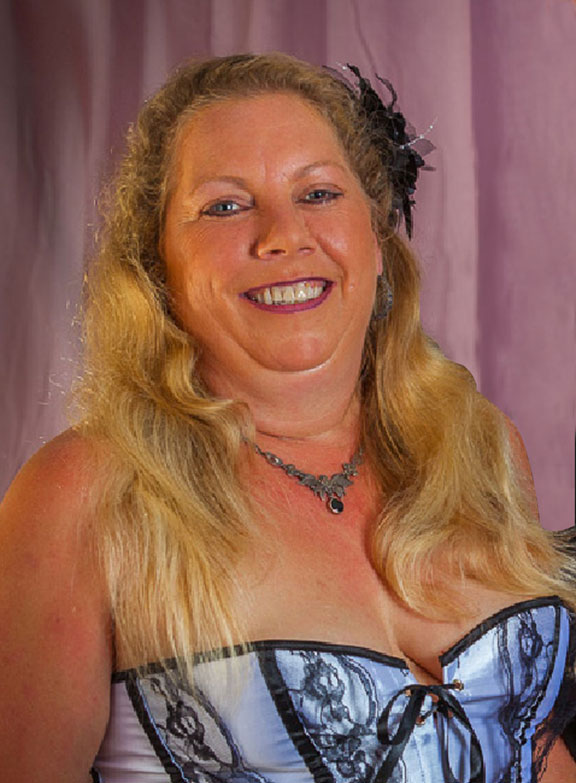 Brieana, slave and wife to her Master, Morgan. They have been living in a 24/7 relationship with him since 2011. Morgan & Brieana were married on February 4, 2017, surrounded by their leather and bio family. She identifies as a leather woman and has been in the lifestyle since 2003. Originally from Maryland she attended Crucible and Black Rose as her first lifestyle events as a guest of a friend that helped her learn about the lifestyle in a safe manner.

In 2007 she and her sons moved to the Charlotte area. Brieana became a contributor of CAPEX in 2008, later serving on CAPEX's board of directors for 2 years, holding 4 different seats on the board during that time. She held the position of CAPEX's IT Team Lead from 2010 through 2018, maintained their website as well as designing all their print media. In addition, she has been the recipient of CAPEX's Volunteer of the Month several times and Volunteer of the Year.

Brieana is a talented Graphic Designer with more than 25 years experience under her belt. She works full time at a local design and printing company, designing banners, catalogs, brochures, vehicle wraps and so much more. 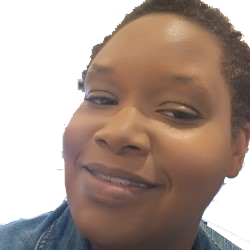 Lazarus (he/him) is a 40-something polyamorous d-type Daddy from Connecticut. His introduction to kink in practice began online in his late teens and through college. During this time he helped start the original Myrtle Beach Kink munch group on the old yahoogroups. After leaving Myrtle Beach in 2003 to return home to CT, he took a break from activity in the scene awhile while staying in touch with one of his dearest mentors, rejoining the public scene to savor his first large-scale kink event with SELF in 2010, where he was able to re-connect with many friends in the South and make many new ones as well. Since then, SELF has become his "kinky homecoming," and an event he can't miss. He began working in SELF's Vending department in 2013. He has presented at venues in Connecticut and Tennessee on the basics of traditional wet-shaving both as a personal luxury and a service item. Lazarus is also happy to visit South Plains Leather Fest each March. He enjoys other conventions as well, particularly DragonCon (as a Shift Lead for Safety) and Hal-Con (on the Guest Team). He's a former firefighter, a current business owner, and an aspiring writer and voiceover talent.  Contact Lazarus

ABizzy originally hails from Hattiesburg, MS, though these days she calls both Chicago home. She spends her days wrangling little people and traveling the country for her service industry job, while the rest of the time, ABizzy devotes her life to her family, partner, and her leather life. She was introduced to BDSM and the leather life seven years ago when she first moved to the Baton Rouge area. That started a journey that has included participation in groups across Louisiana and Mississippi. SELF has been a big part of her leather path as well. She attended her first SELF in 2013, and received her first gifted leather from River, 2013’s SELF Boy, as he stepped down from his title in 2014. ABizzy is the co-founder and Head Little in Charge of Red Stick TNG, as well as, a full member of RSVP in Baton Rouge. She was honored with the title of SouthEast Person of Leather for 2016 and 2017. She was International Person of Leather 2018 and has served many contests across the US with anything from basic volunteering to Judging. ABizzy is a leathergirl, babygirl, bootblack, mentor, teacher, crochet enthusiast, dog lover and rescuer, extreme couponer and Disney addict all rolled up in one adorable, dynamic package.

Master DaddiPanther is a masculine identified, polyamorous, sadistic person and the Head Of Household for the House Of Orchids. His House motto is community, family and education. His preferred pronouns are He/Him/His/Sir. He was covered by members of his leather family on November 3, 2018 at a leather conference.

He has been in the lifestyle for 26 years in which time he has served as a member/board member of several different clubs/ organizations including MTTA Masters class 2011, MAsT: Wilmington, DE, MAsT: Winston-Salem and MAsT: Greensboro. He is the current President for the Onyx Pearls Southeast Corporation and the founder of the NC/SC POC munch group which meets the 2nd Saturday of each month from 1pm to 3pm EST. Feel free to reach out to him with any questions about the lifestyle!! 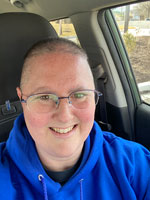 Randi (he/him) is many things: slave, boy, educator, son. He has been with the SELF family since 2010 and loves seeing all the happy faces at each event.  He loves to learn and to meet new people, so please stop him and introduce yourself during SELF weekend.  When he's not raising money as Sponsorship Coordinator or working on the website team, Randi can be found binging streaming media, reading whatever has attracted his attention in the moment, or continuing his education on gender studies.

HellyFaye is a self identified queer, poly, brat from New Orleans, Louisiana. As is true for most little girls who tie their teddy bears up, thanks to the magic of the internet she discovered others like herself. She has been an active member of New Orleans Bondage and Leather Enthusiast or N.O.B.L.E. since 2012. During this time she has been an educator, volunteer, dungeon monitor, party organizer/hostess, and bringer of the party. You can find her on FetLife under the screen name HellyFaye. 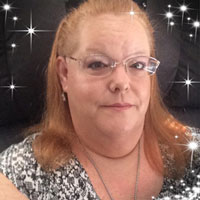 PantherG0ddess lives in Charlotte, NC, with her husband/slave-Samantha to whom she has been married to for twelve years. She has been in the lifestyle for twenty plus years, having began in the San Francisco Bay Area.

Upon relocating back to her roots in North Carolina she began venturing into the wonderful community in both Carolinas. She was associated with the Myrtle Beach kinky scene as well as spending significant time at LaFortress. She settled into her leather family of House of Reaper at Club Ace’s in South Carolina and became a regular at Charlotte Area Power Exchange (CAPEX). While being active in the community, she founded the Charlotte FemDom Society (CFS) and was the Chair of the Board for CFS for five years until health concerns took her out of the community for a couple of years.

She is now the Chair of the Dominae of the Carolinas (DoC) which, she, along with others, founded to serve the Charlotte and surrounding area’s female led relationship needs and has given multiple presentations there. In addition to giving presentations for DoC, she has also given them at CAPEX, CFS, Piedmont Area Kink (PAK) The Warehouse, LaFortress, and The Loft. 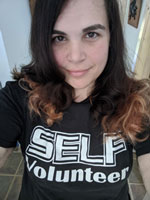 Heather is a 36-year-old versatile queer leathergirl.  She's been involved with various Leather communities for about 13 years, 10 1/2 of which have been spent in the Atlanta area.  Her pursuit of photography is more recent, but no less integral to how she interacts with the world. Her photographs are expressions of how she sees, and fetish photography is a favorite.  She prefers to photograph people in situations involving their own sexuality and fetishes, rather than setting up "hot scenes" for shots - she loves seeing the person inside the fetish, and the fetish inside the person.

Heather lives in the suburbs of Atlanta with her owner and their three cats, who also make the list of her favorite photography subjects.  She served on the Board of Directors of Whippersnappers, an Atlanta-based TNG group, until 2009. She has presented for Whippersnappers, Frolicon '08-'10, and SELF, and has exhibited her work at Spring in the South 2008, SELF '08-'10, and Frolicon 2010. Find her on FETLIFE !

Boy dave, a 49-year-old gay male from North Carolina. Boy dave began his leather journey in the fall of 2000 and hasn't stopped since. With a focus on service, he enjoys boots, cigars, boots, rope, boots, body punching, and boots; he is also open to other activities with the right person. boy dave won the title of American Leatherboy 2014 and also holds the titles of SouthEast Bootblack 2011 and SouthEast Leatherboy 2004. An alumnus of the Charlotte Tradesmen and a member of the staff for SouthEast LeatherFest, boy dave has served as a judges' boy, presenter, and judge at leather events and conferences across the country. You can email him at . 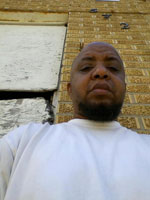 Zir Jah is a long time activist in the areas of nonbinary and gender non conforming and binary Black and Brown trans People. founding member of Onyx Great Lakes.

Zir Jah is one of the co-founders of Transsisitahs-Transbrothas, which was the first conference for trans people of color. They are also a co-founder of the Great Lakes ONYX chapter of ONYX.

Zir Jah has done individual and panel discussions on varying trans topics, talks on fetishes, demonstrations etc, both within and outside of the Leather community.

They are the founder of Safe Haven, an internet safe space for transmen and masculine appearing nonbinary people of color who have been or are still in abusive relationships. Zir Jah is also a committee member of Leather Preservation Weekend.

Zir Jah studies different faith beliefs. They are an ordained Elder and practitioner of African based faith.

Thanks to a dear spiritual friend,who has passed on to be an ancestor, Zir Jah’s personal and professional motto moving forward, is “I Exist to Assist. How May I Serve?” 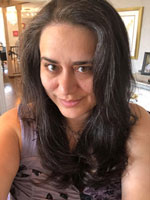 The Pirate is known to be called The Most Helpful Bitch in the Land ... and she is!

Krissie is local to New Orleans where she has been an active member in her community for almost 10 years. She has been in love with the Leather culture, rope, and service for all of those years. She loves to spread that love around in the form of classes, demos, and other education!

She has served in several alternative lifestyle organizations including the NOBLE Council and is the the current NOLAgoL Sgt at Arms. She was also Ms. Spring Fling Leather Fest 2017. 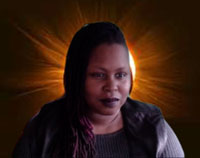 Obsidyen Sunshyne is a gurl made of shadows and giggles. Quietly drifting through most spaces with a wiggly giggly grin she loves to help, especially when there are tickles involved. A leather wearing brat, babygurl Primal slave who enjoys all things to do with impact, self-care and leather. If you listen closely and look into the shadows you may just find her.

tracey is on staff for weekend Registration and Accounting. Previously she has appeared on Real Sex as a prized pony. tracey trained for several years and is also a small guard dog puppy.

tracey was last on the 2007 board as the Sponsorship Chair. She has been on the current SELF board as weekend registration and accountant since 2014.

She found this lifestyle in the early eighties but really didn't embrace it and live it until 1998. She was a board member of MAsT-LI and hosted MAsT-LI for three years (2009-2012). She serves Lady Catherine and believes she's found her owner for life.

Back in the day, when HappyPuppy heard about SouthEast Leather Fest, curiosity got the better of him, so he attended and found his home. His involvement with SELF has ranged from party host, sound tech, and emcee torturer. Away from SELF, he co-hosts demos and play parties, helps lead a hugely successful munch, and continues to be engaged in service for the SouthEast region as is possible.

He primarily identifies as giving yet devious service top, a daring and inventive player, and an active and engaged promoter for his regional community. HappyPuppy is always looking for intriguing music, off-beat sound bites, audio equipment, and bold new ideas. He actively encourages all of the attendees to give their opinion, suggestions, and/ or advice for the show and the parties. He is always looking for ways to grow, and he cannot wait to provide the musical backdrop for his “family reunion” at the next, and every, SouthEast LeatherFest to come.

FetLife FB Event
© 2021 designed by love and powered by intention. Drop SELF a note if you see an issue.
Top