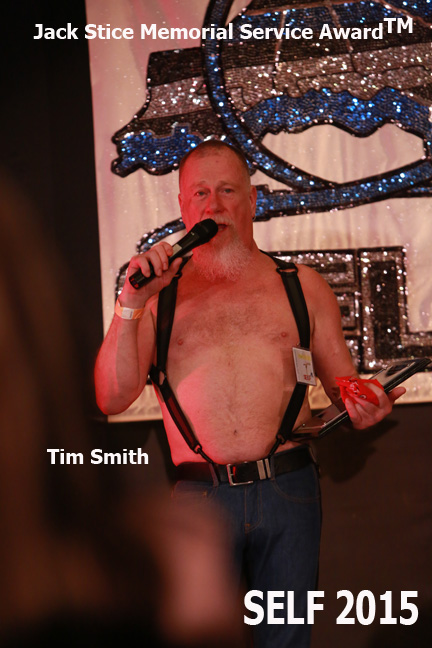 The recipient of the Jack Stick Memorial Service Award received many votes. He is a prominent member of the leather community for more than 20 years.

I want to read some quotes from his nominations:

“His dedication to the community is untiring and never ending. He is always stepping up and volunteering to do "what ever needs to be done."
“He continues to give and give. He often does this going unnoticed and without asking for anything in return. It's rare to see him at an event when he's not up to his ears doing something for someone or the event. He truly is one of a kind. He is someone that you should know. He is the working definition of community service.”

“He has helped raise in excess of $80,000 for charitable concerns. He can always be counted on. I don't travel anywhere in the community that someone doesn't ask me about him.”

“He has such a heart for community. I couldn't imagine a more deserving winner for this award. He never hesitates to jump in and help out fundraisers, contests, or events. Anything that needs to be done, he will do.”

“He has been of selfless service to the greater community. Timmy has raised more money, for countless causes and volunteered his time, all with the grace he can muster and a open heart that is rarely seen.”

“He is a leader without leading, he is the person you can look at and say- he leads by example. He has never asked anything in return and is a wonderful human being.”

“He brings knowledge and experience as well as a healthy dose of down-home, country advice. “

“His laugh and presence are felt immediately when he enters a venue because he is sure to be greeting, hugging, giggling, catching up with all that he sees. He really is an ambassador for the Leather community. He has been known to host events on his own because "somebody has to do it".
“He is one of the most giving men I know. He gives freely of his time, his talent, and his heart. He has poured untold hours into his work in the leather community. He has invested thousands and thousands of hours into raising funds for House of Mercy (HoM), our local HIV and AIDS hospice center. When we visit with the residents at House of Mercy, Tim's heart is at its best. He hugs everyone, he sits and talks with the men and women there, he loves them unconditionally, and it shows.”

This man is an educator, role model and gives when and where it is needed. He does so without asking for recognition or status. He earns the respect of those around him by deed and consistent willingness to step in and do what needs to be done big and small. He helps make the world a better place and shows each of us how we too can be better.
It is a privilege to present the current President of the Tradesman, Tim Smith, with The Jack Stice Memorial Service Award.

20 Days
FetLife FB Event
© 2022 designed by love and powered by intention. Drop SELF a note if you see an issue.
Top