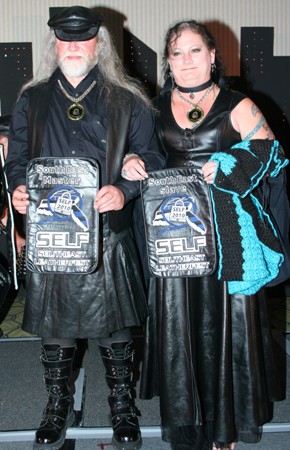 Master Rick and I want to offer our deepest gratitude, thanks and love to all of those that assisted us, stood by us, supported us and critiqued us during the past year as we made our preparations and bid for the M/s title here at S.E.L.F. Without all of you, we would never have made it ... thank you from the bottom of our hearts. ~slave gypsie~ S.E. slave 2010.

The house is very quiet now. Everyone is gone. Master Rick has returned to work. My boy kenny has returned to Jacksonville, NC and his duty. It’s time for reflection, for remembering.

I remember faces mostly. Smiling faces. Faces full of encouragement, support and most of all ...  hope. It’s overwhelming, the hope so many have placed in us, in me. There is the hope from the producer of the contest that Mater Rick and I do well, represent the contest to its fullest potential. There is the hope of the Community that we will represent their ideals, their wishes and their dreams to the best of our ability. There is the hope of our closet friends and our leather family to always honor our own beliefs and standards as we begin our new journey as SouthEast Master/slave 2010.

Then there is the hope and solid confidence in each other that we will present ourselves always with dignity and honor in all things, especially to one another. Hope is love and light. Hope allows for understanding and acceptance. Hope brought us to SELF in 2010 and hope for the future will sustain us throughout our run and beyond. Webster’s  dictionary describes hope as “a feeling of expectation and desire for a certain thing or things to happen.” May we always strive to fulfill the expectations and hopes of those who placed us here; but more importantly, may we always endeavor to fulfill the hopes and expectations placed on each other as Master and slave.

Christmas is so many different things to so many different people, there is no one true definition that fits everything and everyone. Recently, a gentlemen said to me that he was having difficulty trying to figure out the Lifestyle because the boundaries are so blurry, the labels so varied and the rules changeable upon the person, the relationship and the situation.

And he was correct. That's what makes us what we are, who we are. We allow each other this freedom to be and express what we are inside, even when and if (and it usually does) it changes daily. Without that change, without that growth we become stagnate and judgmental. We would become close-minded within ourselves and each one of our smaller Communities within the one large one would become 'religions' of their own. Organized pods of people believing their way is the only 'true' way, their way is the one way to find redemption and happiness because it is the way that is the most comfortable for them.

Yes, it does make it more difficult; especially when just starting out and finding your way along the myriad of paths along this Journey. But what a fantastic view along the way. What wonderfully magnificent experiences as we cross those boundaries, nudge those labels aside while creating new boundaries and labels not only for ourselves but for others.

Each one of us fords a new path. Each one steps upon the footprints of our forefathers, leaving perhaps deeper grooves, smoother indentions, a more defined print or sometimes we unintentionally blur the outline even more until the next person steps in and then, there it is! You look back and see it clearly, as though it had been laying there waiting for you the entire time but only now can you see it, interpret it and use it to carry on.

We all have them, we all live them. Itʼs what makes us human, makes us unique within that which we regard as Tribe and Community.

Differences are what draw us to one another and sometimes, push us apart.
We revel in our diversity as a Community, accepting one another for what and who we are and walking the path we have chosen with pride and dignity.

So why then, do we have so much rift within a Community that has sworn to embrace its diversity and openness? It is because of these very differences that fissures begin and eventually, turn into valleys and then canyons that separate us from those same like minded individuals we want to be with.

The clicheʼ “Embrace Our Diversity” is just that, a clicheʼ unless it is truly lived and ascribed to in the daily living of our lives. That does not mean only in accepting someone because he or she may be gay or a switch or comes from a different household than another or even, a different region.

I am not speaking of contest or conference regions but regions of the country. We have traveled extensively this title year, Master Rick and myself. Each region [of the country] has its own flavor, its own style, its own set of rules, protocols and rituals. We have found that sometimes we, ourselves included, forget that we are not only dealing with a different set of ʻlifestyleʼ rules and the innate understanding each region has therein; but also we are dealing with a broader difference in the very basic understanding of regionally cultural differences.

Case in point and an example. Master Rick and I happened upon a well-known elder in our Community who was eating dinner with a companion in a venueʼs hotel restaurant.
Our personal and cultural protocol deems that we do not interrupt the personʼs dinner unless specifically waved or beckoned over by those eating. We were not invited to the table for conversation either by a wave, nod or by voice, so we proceeded to our table and thought nothing more about it.

The next morning, we were approached by the dinerʼs companion who stated the elder found us to be rude and arrogant for not stopping by to at least say hello. Master Rick and I were stunned, for in our minds, in our hearts and by our own cultural standards, we had paid the elder the highest compliment in ʻnotʼ disturbing their meal.

Thankfully, after some discussion with the elder, we came to an understanding and in fact, all of us were unintentionally educated by the incident. An assumption was made and a conclusion drawn all on the basis of our cultural and lifestyle predilection towards commonality. We speak of diversity as individuals, leaders and within our groups on a daily basis, yet a small misunderstanding like this one, could have blossomed into a fullfledged controversy because we failed to truly embrace our diversity both within and out of our chosen way of life.

It is in the little things where we can make a difference. A simple thank you, a nod of the head, especially when in unfamiliar territory, can mean the difference between making a new friend or creating a maelstrom of gossip and misunderstanding between likeminded individuals. If someone does not speak to another or approach them about a situation, it may well not be because they are being rude, non-communicative or worse; want to cause a shit-storm of gossip and rumor mongering at all. It may well be that their own protocol(s) or that of their culture, demands otherwise.

Assumption of behavior versus embracing or at least being aware of our individual and regional differences can go a long way toward smoothing unintentionally ruffled feathers, hurt feelings and perceived slights and will go a longer way toward healing unintentional rifts, misunderstandings and possible chasms that could and most certainly would eventually be, harmful to us as individuals and as a Community. Amber: Ms. SouthEast LeatherFest 2010 2018 Update: In this time post title, amber had a child, and is raising her family and moved up North. She has grown in ways that are wonderful, completing and so far the best part of her life. She is excited to explore her new surroundings to find new friends and community. {youtube}pzJIOFSZmrc{/youtube} {slider Calendar of Events|closed|red} Transformus: July 16-18, Ashville, NC (http://transformus.com)Burningman: Sept 1-6, Black Rock Desert, NV (http://burningman.com)Athens MAsT Sept. 17thAlchemy: Sept 31-Oct 3,  Layfayette, Ga ( ht... Master Rick and slave ~gypsie~: SouthEast Master/slave 2010 Master Rick and I want to offer our deepest gratitude, thanks and love to all of those that assisted us, stood by us, supported us and critiqued us during the past year as we made our preparations and bid for the M/s title here at S.E.L.F. Without all of you, we would never have made it ... thank you from the bottom of our hearts. ~slave gypsie~ S.E. slave 2010. {youtube}82zWVMUEnp4{/youtube} {youtube}0N195EY9CcI{/youtube} {slider Calendar of Events|closed|red} December 18, 2010 - TarHeel Leather Bar Nite at Warehouse 29, G... Did you know we have group rates?! If you and your groupare interested in coming to SELF together, check out all the details!!!

When you log in to the SELF website, our history opens up to you. Check out our years past, our presenters, our awards, our themes, our art, and all the other things that have made SELF so special for so many people through the years!