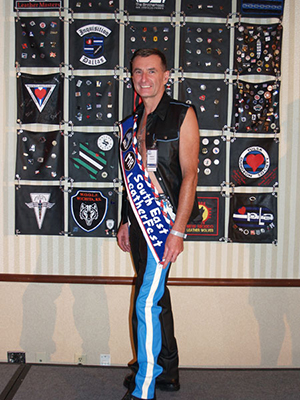 Well, it is October, and I have been very remiss in not getting a column started and posted.  My only defense is that it has been a very busy three plus months since we had our wonderful contest and event.  In that time, I have continued to grow and develop and make new friends.  I do want to give special recognition to Sir Bill (William Pickeral of Atlanta) and boy brandon (Brandon Burns of Knoxville), who at one of the lowest times in my life were there for me – no questions asked.  They are unsung heroes in many people’s lives.  Thanks guys.

On a personal note, in addition to my SELF duties, I am aggressively job hunting – looking to get back into the corporate world which I have missed these last four years.  On a more play oriented basis, (not that work isn’t play – it is), but leather wise here are some tentative plans / schedules.

October 20th - Nashville, Tenn: Attending the “Mark” and presenting “Puppy play -- with one pup and two cats”.  That should be quite an event all of its own.

October 27th – La Fortress, NC: This is pure fun.  It is theire grand opening of the new location – a small secluded ranch on the reivers edge – with a few thousand square feet of play space.  I’ll tell you more about it when I get back.  IN any case I have a tentative play date with a female dom.  Hmmmm, ohhhh the journey that I am on – and many thanks to Sir Jim for starting me on that journey.  No I am still your gay boy, just have become very much of a switch in who and what I play.  Equal opportunity billing so to speak.

I am playing my calendar loosely right now – money is so tight, that I am not able to really do much advance planning / plane tickets.  But as things progress, I will keep you informed more.

Some noteworthy ones I will / hope to attend include SITS-08, Mr. ILS/b contests, Ms World etc.

Education programs:  For those of you who don’t know, I present beginner to very advance classes on the following topics.  My style is to invite heavy class participation, hands on teaching, and where possible seek local participants to be my demo dummy’s.

5. Poly Families – making it work – knowing when it isn’t, and what to do.

6. Finding the right Sir / sub –  The nature of a contract

8. Dominants – Head of the household – Obligations – Delegation of authority

Recent events:  I have been getting around a good bit of late, mostly non-official, attending the local bar scene, and attending some local munch groups.  One thing the gay world could definitely do better is emulate the hetro “munch’ groups.  I do plan on attending more of the “whipper snapper” events at 1763 where I have an open invitation to visit and demo / play.   Below are some of the more news worthy events.

August 24-26th, “The Floating World”: This was a great convention up in Edison NJ where I served both as security guard and “demo dummy” to Ms. Sexy Sadist” for a class on Anal Play.  For a gay male, never having been fisted, getting “probed” like that by a woman in front of a hetro audience was an experience all of its own.  I think I would recommend it .  For those of you who might have a chance to attend that annual event, please do so.  They had over 80 plus classes, and a play space at a local convention hall in excess of 25,000 sq ft, and lots of toys.  Seemed a bit strange being the “token” gay boy (I think there were a total of five of us up there).  All in all a very welcoming group of people – highly recommend it next year.

September 2007 – La Fortress:  More recently, I attended “LeFortress” a pan-sexual club in Greensboro NC, where as usual I got myself in a bit of trouble – only this time I was the “victim”.  Although, I rarely play as a bottom in public any more (matter of circumstance vs desire), every now and then I do get lucky, and even luckier when that play gets real serious and heavy.  Well September was my lucky night up in NC.  Played with “Sir Key”, also known as Master LF (for Leather Face).  A young and definitely sadistic Dom who in a short 15 minutes had me squirming on and off a flogging bench.  Actually the whole scene was an hour – but the heavy part was 15 minutes, to the point where almost everyone wanted to jump in and “save me”. Believe it or not, but it was one of the very rare times where I was totally silent.  Fortunately, a good friend up there knew me, and told them to back off and let me fly – which I did.  Gave a good accounting of us Georgia boys to those NC red necks.  I hope to see them attend SELF next year! Henry Lloyd: Mr. SouthEast LeatherFest 2007 October 17, 2007 Well, it is October, and I have been very remiss in not getting a column started and posted.  My only defense is that it has been a very busy three plus months since we had our wonderful contest and event.  In that time, I have continued to grow and develop and make new friends.  I do want to give special recognition to Sir Bill (William Pickeral of Atlanta) and boy brandon (Brandon Burns of Knoxville), who at one of the lowest times in my life were there for me – no questions asked.  They are unsung heroes in...

Qtip: SouthEast Bootblack 2007 Updated 2010: Q IMsLBB 2008 SELFBB 2007 Q, easily recognized by her blonde mohawk, is a two-time award winning bootblack and internationally recognized presenter both within and outside of the leather community. An activist for more than 15 years, Q has consistently made strides to bridge the various communities to which she belongs. Her most recent journey as a titleholder in the leather community provided her with the opportunity to continue a rich tradition of education while indulging her activist side. Born and raised a southern boi, Q currently lives in... Did you know we have group rates?! If you and your groupare interested in coming to SELF together, check out all the details!!!