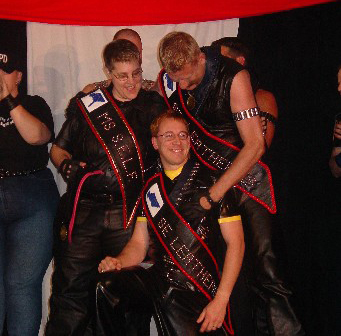 My name is Richard Gray, and I am Southeast Leather Sir 2003. I am 46 years old, and live in Greensboro, NC. My partner is Joey Kue. I was raised in eastern North Carolina, land of tobacco, cotton, and pigs. But most importantly, my life in kink began at an early age with childhood games of cowboys and Indians (always seemed to be the cowboy tying up the Indian to a pole), and cops and robbers (always capturing the robbers and jailing them) and prisoners of war (again, disciplining the prisoners for trying to escape).

Let me get past the boring stuff of what I do and then onto the fun stuff. I work in sales for a small company in Greensboro, selling software nationwide. Travels take me north, south, west and not too far east (Outer Banks as far as I have been so far). So I may be in your city sometime in the future.

My life in leather started out in my early twenties as an avid reader of Drummer and Honcho, looking for guys who were looking for more than the usual bump and grind. I have found that I don't have a particular type or preference. It's the full package that will get me going. The right attitude and you have my attention right away.

I am a political and social activist. I started early in the AIDS crisis with training and the start of Triad Health Project in Greensboro. As a bartender at one of the local gay bars in the mid-eighties, I had the chance to meet and play with guys who many considered on the edge because of their leather and kink play. This lead to our forming Tarheel Leather Club. I am an active member of the club serving currently as Treasurer. I have served as President, Vice-President, and Pledgemaster in the past. My club has honored me as Member of the Year in 2002 and 2003.

I enjoy play with others when you are in the same head space, where you move from one action to another like a symphony progressing from one chord to another, reaching a crescendo, then retreating, moving to another crescendo, and retreating again. Repeating this over and over til the final notes are sounded. Ecstasy released, minds bond, bodies enthralled.

Head space is important and while interested in many, only a few get selected. Cause if it doesn't trip daddies trigger then it ain't going to happen.

I was raised on the importance of family. As most of us realize, being gay puts us on the outside. Being a gay leatherman or leatherwoman puts us even further out there. We create our own families of friends and cohorts, players and tricks, who become related by our leather bonds. My leather family is grounded in North Carolina, with friends and acquaintances from across the state. I enjoy the friendships greatly that I have made over the years. Friends and fuck buddies from Atlanta to Seattle, New York to New Orleans. These friends help me keep my head straight and grounded.

Men and women of all ages, shapes and fetishes have been my teachers. Most importantly has been Master Doug Harris. His honesty and guidance have been a great source of strength when my own may have been failing. Thank you Sir!

Another is David Wright. David was a friend, leatherman, co-worker, and guide on this journey. Our friendship has lasted over nineteen years, and even though he is no longer with us, his words of guidance still help today.

During the competition in Tampa Bay, FL this past October for International Leather

Sir and Boy, I had the opportunity to meet and become friends with some wonderful guys from around the country. We are a group that like each prior year's competitors has formed another family within our own Leatherworld. The competition was tough, and the winners are well-deserving of their titles. I wish them well in their title year and in the future.

We always hear that life is a journey, sometimes we get to view that journey from the driver's seat, and other times as a passenger. So if this sounds familiar, then come along on my journey with me. Get to know me when I am in your area. Let me get to know you. Become part of my family! 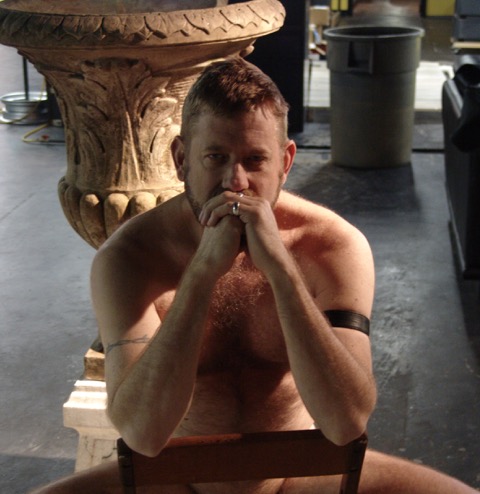 I’m Dick, Richard to some. Some know me as a queer, perv, sexual deviant, who loves men, furry men, shaved men, bears, beards, tall men, short men, men of color, and did I say men. I’m a man, leatherman, living with AIDS, a lover, brother, son, friend, activist, a seducer, and who knows what else. I’m an image on Recon, Facebook, Manhunt, Fetlife, and many other sites. As you see, I am still evolving.

I’m from Greenville, NC. Grew up the odd kid in catholic school with nuns that had originally taught my mom as a girl in PA. Guess that’s where the kink began. From shooting arrows at each like St. Sebastian to the corporal punishment of the nuns, I had a good start on the road to kink. I’ve known I was attracted to men since around 4 yrs old, gave my first bj at 8, and was knew I was queer in my early teens (or so my classmates liked to remind me). 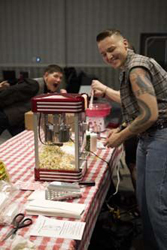 We want to say a big THANK YOU to all our volunteers that truly make the world go round at SELF!!